You are here
HomeHome > Elba BlogElba Blog > The 11th ANJOCA Golf Cup was a hit!

The 11th ANJOCA Golf Cup was a hit! 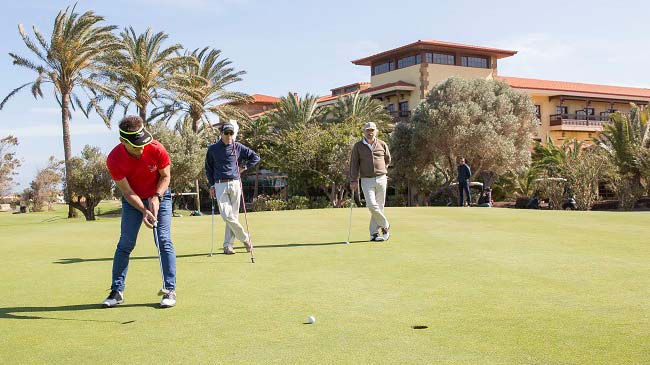 The Anjoca Golf Cup was a complete success, not only due to the turnout, but to the spectacle throughout the event.

On Saturday Fuerteventura Golf Club course hosted the eleventh ANJOCA Golf Cup, organised by the Elba Hotel chain. The competition attracted a large crowd, who closely followed the tournament’s 108 participants, which included both professionals and amateurs.

The president of the Canary Island’s Golf Federation, Diego A. Cambreleng Roca, didn’t miss this year’s ANJOCA Golf Cup edition, which, after 11 years, has become one of the island’s most anticipated sporting events. Ángel Jove Capellán, president of Anjoca –the parent company of Elba Hotels, and Fernando de las Heras, general manager of Elba Hotels, were also present on the side lines.

“It was a great sporting event and competition. Both the participating golfers and the audience were able to enjoy a day of good golf and the magnificent surroundings offered by the Fuerteventura Golf Club", said De las Heras.

For the second year in a row the tournament had a 13:00 tee off. In the evening, a cocktail hour followed by a gala dinner added the perfect finishing touch to the day. That was when the organisation handed out the prizes, going to:

Many participants and spectators of the ANJOCA Golf Cup staying in the Elba Sara Beach & Golf Resort and the Elba Palace Golf & Vital Hotel, continued to play golf throughout the weekend. The island of Fuerteventura is an idyllic destination for golf tourism and the tournament organised annually by Elba Hotels is undoubtedly an event that helps to promote it.